Two new works are now live for fans of Jinji the Gengar to enjoy. First, NShims has completed the second chapter of “The Revenge of Witch Espurr Part 3”; and you can now view the completed animation, or read the full written story as typed up by yours truly, at the usual address 🙂 In […] 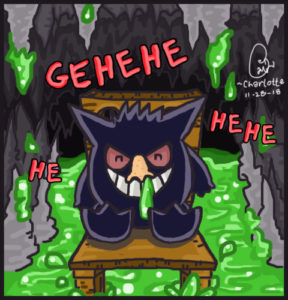 In his spare time not performing pranks, playing games or haunting with his fellow Ghosts, Jinji usually dedicates himself to various forms of intense study. One of the many subjects Jinji regularly conducts research into is that of mortal disease and ailments. Though this may appear morbid to some, Jinji actually has an altruistic purpose […]

A combination idea by Jinji and the Deviant and Pixiv Artist, xxlPanda, inspired by their previous work. Master Ghost invites Jinji to an all-night party celebrating the birthday of Jinji’s keeper. Upon seeing the huge Birthday cake waiting for him down the road, Jinji floats ahead, eager to get the first taste. Little does he […]

I’ve given the Miscellaneous Art section a small update to add credits for each work listed on the page; and to add another new drawing to the index, following a recent gift from xxlPanda on DeviantArt. In addition, the page is now divided into two sections: “Canon”, for works that form part of Jinji’s official story or depictions; and “non-canon”, for non-storyline randomness 😉

Introducing two new characters! With the recent publication of a work-in-progress preview of my next side-story, I feel it’s time to finally introduce two new characters to the Jinji universe – Phantisserie the Haunter, and Alessandro the Rotom. Both now have profiles on my (newly revamped) “Character Profiles” page, bringing the total number of named […]

A young Rotom with an energetic, carefree attitude and endless natural curiosity. Alessandro provides the mansion with a source of electricity for the precious few electronics that exist through the mansion. While he tries to be a good soul and help out the other Ghosts as much as he can, his excitability often gets the […]

A female Haunter who, in her former life, was an artisan baker from France. Passionate and talented in her craft, she was often overlooked and put down by rival – particularly male – bakers; and encountered many obstacles in her quest to make a mark as a professional – thankfully, she was a very determined […]

In 2016, the fan-made MMO Pokémon World Online hosted its most famous Halloween event, Fossilween, where players were taken through time in a Pokémon-themed take of the history of Earth, solving problems along the way in a bid to stop a mysterious Pokémon destabilising the passage of time itself. Interestingly, Jinji the Gengar made a […]

The Revenge of Witch Espurr

It all started so innocently… One day, a Ghost Hunter was investigating a haunted mansion. After a series of paranormal activities, starting with disembodied voices and mists and ending with an actual sighting, the Hunter decides the location is worthy of further investigation; and decides to go get his partner, a young woman called Charlotte. […]

The soul of a middle-aged human originally named Jasper, who once explored mountains before being killed in an avalanche. Now resurrected as a Gastly, Gaspar is one of the youngest Ghosts currently in the care of Jinji; and is still getting to grips with his new form. As a result, he is full of curiosity […]