Jinji Across the Multiverse

For a number of years now, Jinji’s appearance has remained remarkably consistent in all his appearances in artwork and stories produced both by and for Jinji. Jinji is always a Generation 3-style male Gengar, and even appearances in other forms such as Mega Evolution have been few and far between. But what if that wasn’t […]

Read More » Jinji Across the Multiverse

Jinji and Meuka in: A Snotty Souvenir! 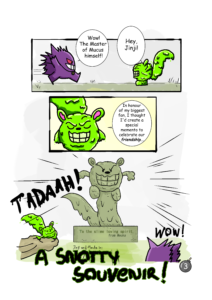 A crossover spin-off comic created as another collaboration between Jinji and Kumada Panda, which ironically turned into the longest comic strip ever written by the pair – at 15 pages long – despite having originated as one of Jinji’s simplest ideas. Having been a fan of the Neopets villain Meuka for years, Jinji is surprised […]

Read More » Jinji and Meuka in: A Snotty Souvenir!